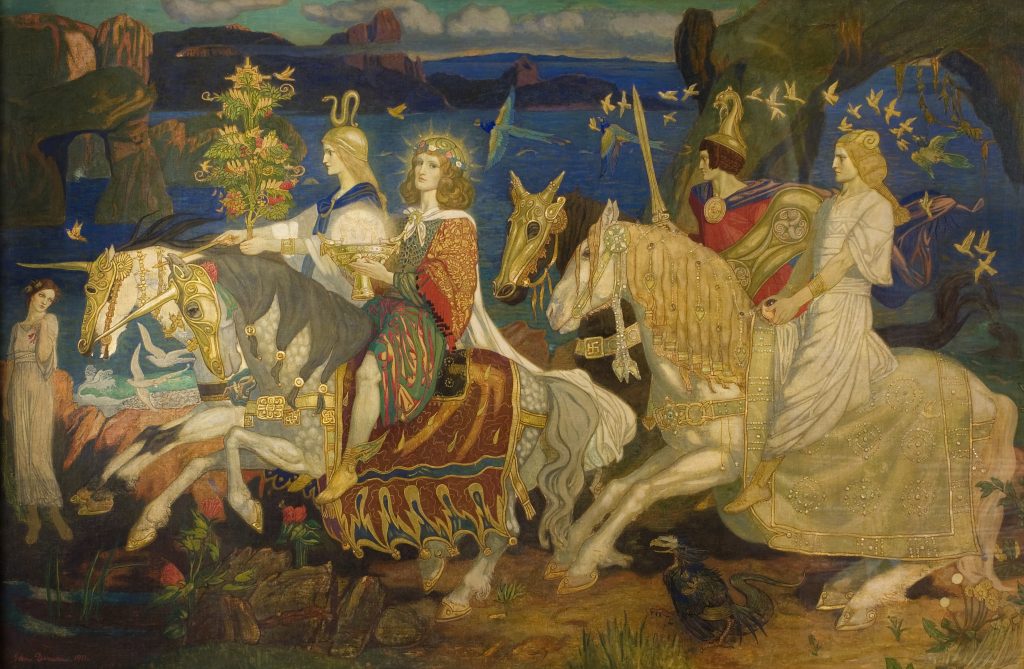 The Celtic people were polytheistic, meaning that they believed in more than one god. It’s believed that they actually worshipped over 300 gods, but due to a lack of written sources, it’s difficult to tell for sure. For this reason, we don’t know a great deal about Celtic religion. All of our knowledge is based on the sources that we do have, which are mostly myths and legends that were recorded.

There are 10 Irish Celtic Gods and Goddesses that feature heavily in these myths and legends, each with their own tale. Each of the gods and goddesses were symbols of different aspects of life.

Aengus Óg was the god of youth, beauty and love. He’s often pictured with birds flying around him, which are said to symbolise kisses and love surrounding him. There is a story about Aengus falling in love with a maiden in a dream. He set out to find this maiden, who had been chained to 150 other maidens with gold. All the maidens were turned into swans, then Aengus had to work out which was his maiden so he could marry her. He guessed correctly, then he also turned into a swan and the two flew away together.

Dagda is the god of the Earth and is often known as ‘The Good God’. He’s the leader of the ‘Tuatha De Danann’, which were supernatural beings that are said to have lived in Ireland before the arrival of the first Irish settlers. He is the ruler of life and death and carries a huge club that can kill 9 men in one swing, or restore their lives with the other end. He also carries a harp and a cauldron. It’s said that he can play the harp to call on the seasons and there’s an endless supply of food in his cauldron.

Áine of Knockaine is known as the goddess of youth, beauty and love, although her story is different from that of Aengus Óg. She’s recognised in stories for her pleasant and timid personality, which many of her followers would find comfort from. Many of the stories about Áine are sad, since they talk about how she was often taken advantage of and treated poorly by the men in her village. Despite this, the stories also tell us that she brought hope to the women around her and would remind them of happier times. 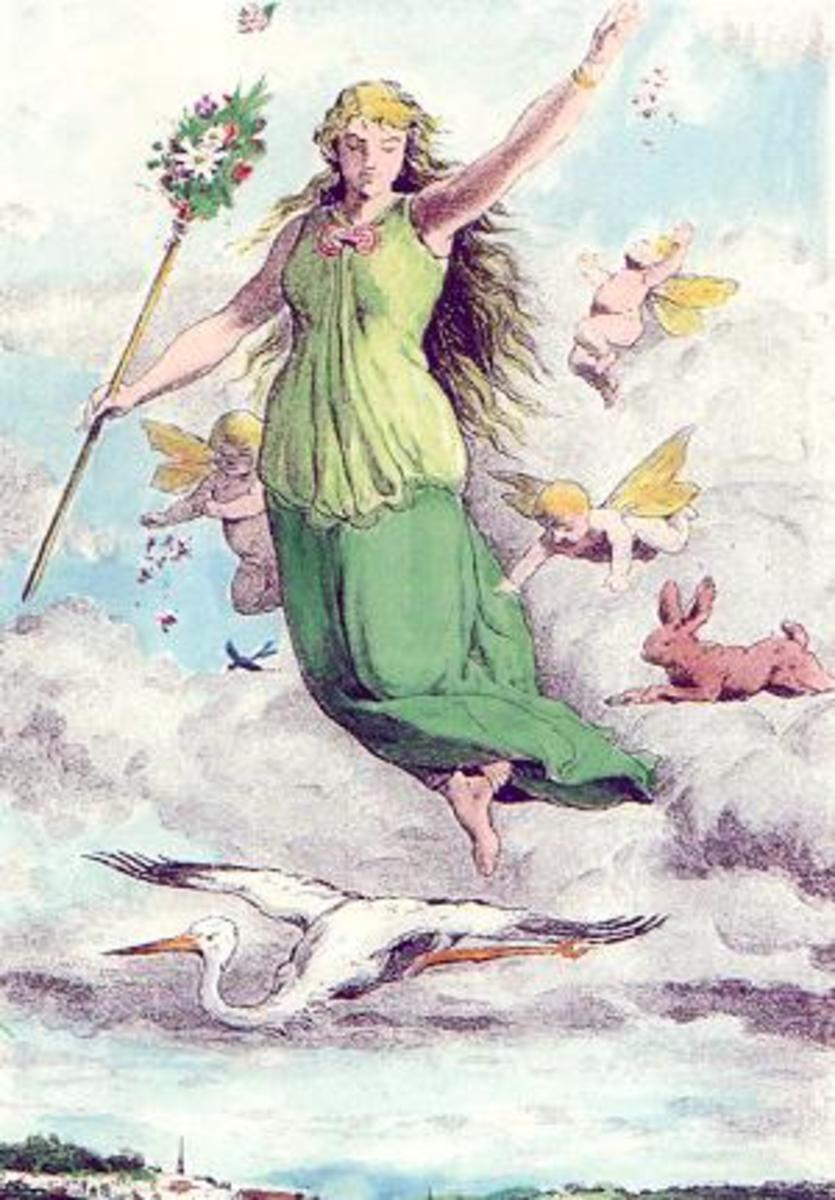 Eostre is said to be the goddess of spring. However, some mythologists have debated the idea that she may have been created by the English monk Bede, rather than an original part of mythology surrounding Irish Celtic Gods and Goddesses. More specifically, Eostre is the goddess of dawn and light and was thought to be friendly with rabbits and hares. She would celebrate with them every April with a feast, which forms part of our beliefs around Easter.

Macha is the goddess of war, life and death, but she’s also associated with land and horses. She’s actually thought to be one of the 3 traits of the goddess Morrigan. The legend says that Macha would feed on the heads of her slain enemies. She regularly appears as a hooded figure with a crow or a hooded crow herself, since ‘Badb’, meaning ‘crow’, was one of Morrigan’s other traits. Her name can be translated as ‘Great Queen’ or ‘Phantom Queen’.

Caer Ibormeith is the goddess of sleep and dreams. She’s also the wife of Aengus and is the maiden who is turned into a swan in the story of him finding love. Once Aengus recognised her, despite her being a swan, he was also turned into a swan and they flew away together. The story goes on to say that they were both singing a lovely song as they flew away. According to legend, anyone who heard this song would sleep for 3 days and 3 nights. This is why Caer is known for being the goddess of sleep and dreams.

Diancecht is thought to be the god of healing and medicine, since he was the physician of the ‘Tuatha De Danann’. There is a legend that Diancecht blessed a well, called the well of Slane. Those who were injured would be able to bathe in the water of the well to heal their wounds. His brother, King Nuada, lost one of his hands in a battle. Diancecht was able to create a new hand made of silver to replace it. Diancecht’s son, Micah, was jealous of the relationship between his father and his uncle, so he stole the silver hand. Micah was killed by his father soon after this.

Cailleah is said to be the goddess of disease and plague and is often depicted as an old hag with the teeth of a wild bear. She was often referred to as the ‘Mother of All’ and was one of the great sorcerers. There is a farming superstition about Cailleach, which says that she is represented by the corn dolly that is made out of the first harvest of the season. The dolly is passed from farmer to farmer until it reaches the last farmer to harvest that season. This farmer has a duty to look after the old hag until the start of the next harvest season. 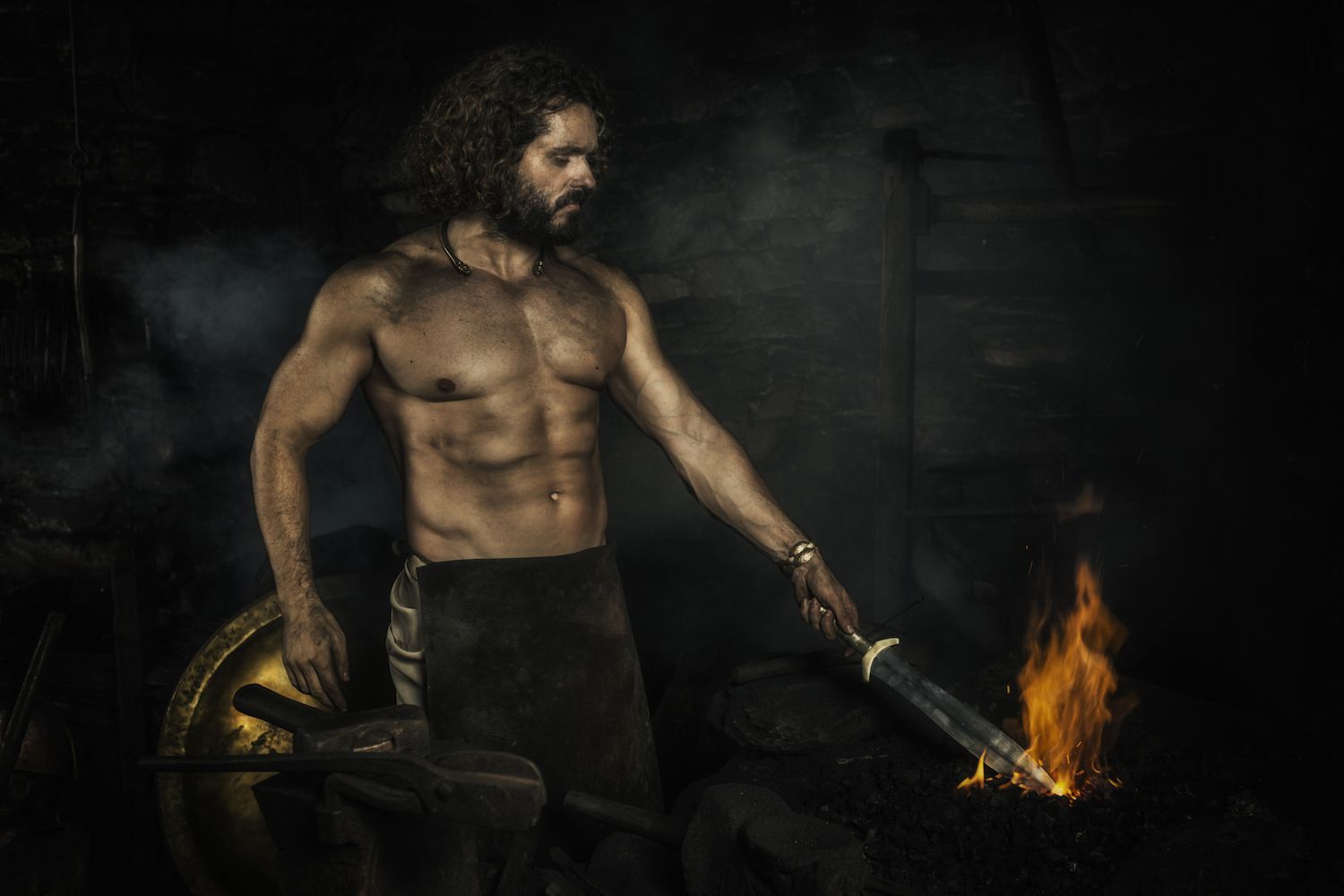 Goibhniu is the god of weapon-making and blacksmiths and was the maker of weapons that would always strike true in the ‘Tuatha De Danann’. He was also known as a legendary brew master who made eternal mead and tears of life. It’s said that the beer he brewed could grant the drinker immortality.

Badb Catha is the goddess of war and is another one of the 3 traits of Morrigan and Macha. Badb’s name translates as ‘Battle Raven’, which is fitting to her role in war and the way she is often visually portrayed. Badb would partake in battles and assure that it went in her favour, by confusing the enemy with her magic. She was so skillful in battle that a battlefield would often be referred to as ‘the battlefield of Badb’.

Who were the Tuatha De Danann?

In Irish mythology, the Tuatha De Danann (Gaelic for ‘People of the Goddess Danu’) were a supernatural race of people who lived in Ireland before the ancestors of today’s Irish people arrived on the island. Many of these Irish Celtic Gods and Goddesses were thought to have been a part of the Tuatha de Danann.

According to legend, some members of the Tuatha De Danann are still present in Ireland and only interact with people in mystical forms, such as fairies or angels.