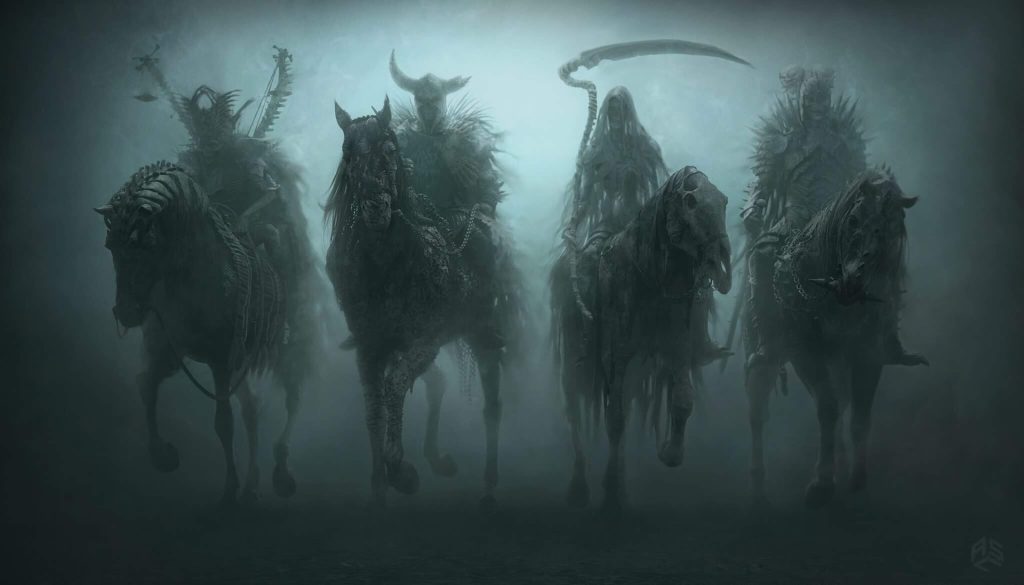 What Do The Four Horsemen of The Apocalypse Truly Represent?

The Four Horsemen of the Apocalypse are among the most dramatic images in the Bible. Described by the apostle John in Revelation 6:1-8, the four horsemen are graphic symbols of the destruction that will come to the earth during the end times.

As Revelation 6 opens, John sees Jesus Christ, the Lamb of God, begin to open the first of seven seals on a scroll. This scroll represents God’s future judgment of people and nations.

Leading up to this point, everything that John saw in Revelations 4 and 5 was taking place in heaven—the worship of God and the Lamb around the throne. But in Revelation 6, John, who is still in heaven, begins to see what will happen on earth at the end of times when God judges the inhabitants of the world.

The first horseman, a man on a white horse, is detailed in Revelation 6:2: I looked up and saw a white horse standing there. Its rider carried a bow, and a crown was placed on his head. He rode out to win many battles and gain victory.

In Scripture, the bow has been a long-standing weapon of military triumph and the crown is the conqueror’s headdress. Some scholars have argued that this first horseman is Jesus Christ, but that interpretation is inconsistent with the immediate context and the symbolism of the other three riders. Thus, most scholars recognize the first rider to represent military conquest.

Some Christian scholars also believe that Conquest may also stand for the Antichrist, a charismatic leader who will soon emerge as a false imitation of Jesus Christ.

The second horseman is described in Revelation 6:4: Then another horse came out, a fiery red one. Its rider was given the power to take peace from the earth and to make people kill each other. To him was given a large sword.

The second rider appears on a fiery red horse, with the power to take away peace from the earth and make humans slay one another. He carries a mighty sword, which is not a large two-edged sword, but a dagger, like the kind used in hand-to-hand combat. This horseman symbolizes the devastating violence of warfare. 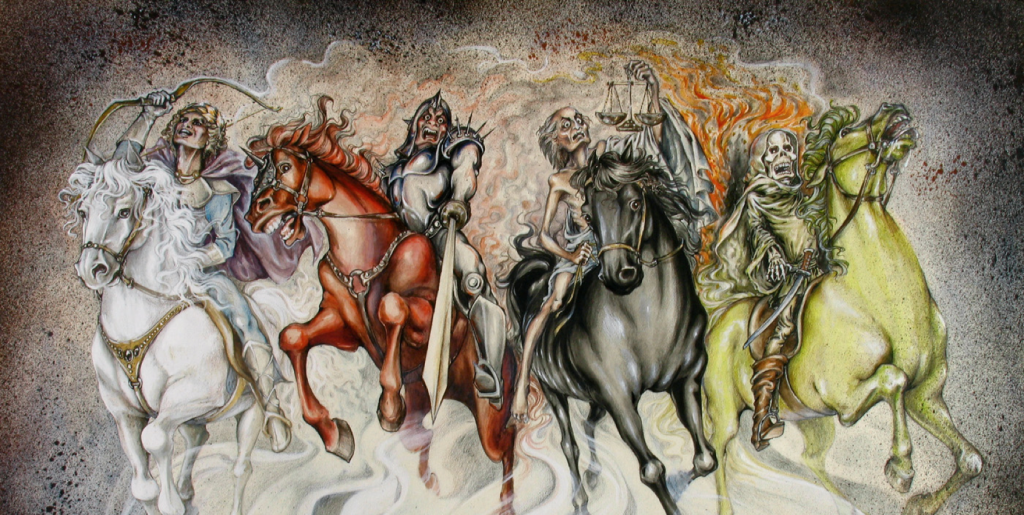 The third horseman, in Revelation 6:5-6, rides on a black horse: And I looked, and behold, a black horse! And its rider had a pair of scales in his hand. And I heard what seemed to be a voice in the midst of the four living creatures, saying, “A quart of wheat for a denarius, and three quarts of barley for a denarius, and do not harm the oil and wine!”

This rider holds a pair of scales in his hand. A voice predicts unbearable inflation of costs and scarcity of food, causing widespread famine, hunger, and shortage of necessities brought on by war.

The scales allude to the careful measuring of food. In times of scarcity, every grain of wheat gets counted. Even today, warfare commonly brings on food supply shortages and starvation. Thus, this third horseman of the apocalypse personifies famine.

The fourth horseman, in Revelation 6:8, rides a pale horse and is named Death: I looked up and saw a horse whose colour was pale green. Its rider was named Death, and his companion was the Grave. These two were given authority over one-fourth of the earth, to kill with the sword and famine and disease and wild animals.

Hades (or the Grave) follows close behind Death. This rider symbolizes the massive and widespread loss of life. Death is the obvious effect of the previous three: conquest, violent warfare, and famine.

The symbolic colours of the horses reflect visions by the prophet Zechariah (Zechariah 1:8 and Zechariah 6:2).

God is ultimately in charge of the global affairs of nations and people. Despite the dire consequences of the events symbolized by the Four Horsemen of the Apocalypse, one truth stands clear: their power to destroy is limited.

As with many other Bible prophecies, Christians disagree over what will happen in the end times. Different theories exist for the tribulation, rapture, and second coming. We will cover these in future articles. However, feel free to share your views and beliefs on the subject in the comments below.

1 thought on “What Do The Four Horsemen of The Apocalypse Truly Represent?”