Breaking Down The Differences Between Major Christian Denominations

One topic that can be confusing for many people is the seemingly endless variety of church denominations. What’s the difference between a “First Baptist” church and a “First United Methodist” church? How do you know whether you should attend an Assemblies of God church or a Presbyterian one?

To help, here’s a quick overview of the different denominations of Christianity and what makes them distinct from each other.

What Is a Denomination?

A denomination is a branch or sub-group within Christianity that has a distinct name, organizational structure, and set of core doctrines. Denominations may differ in their interpretation of minor issues or on how churches should be run, but for the most part they agree on essential matters of doctrine about Christ and salvation.

That said, there can be a great degree of variety even among churches within the same denomination. The best approach to choosing a denomination to join is to read the doctrinal statement of the particular church you’re considering. Examine whether that church takes an approach that you believe is biblical and that you can adhere to in good conscience.

The Main Branches of Christianity

Roman Catholic: Catholics consider church tradition as equal in authority to the Bible, and also look to the Pope (the bishop of Rome) as the key human authority over the church. They also believe that Jesus’ sacrifice secured grace for all people, but individuals receive that grace through the sacraments offered in the Catholic Church (like Eucharist, baptism, confirmation, penance, etc.). Some modern Catholics also believe that people can earn salvation through their good works, without faith or church participation (!). It is common for Catholics to venerate Mary, the mother of Jesus, along with other saints.

Eastern Orthodox: The Eastern Orthodox Church (or just “Orthodox Church,” or “Orthodox Catholic Church”) split from the Western (Roman Catholic) Church during the Middle Ages over issues of church leadership and theology. The Orthodox Church maintained that teams of bishops called synods should lead the church, rather than a single Pope. Theologically, the Orthodox Church places a high emphasis on mysticism and considers salvation to involve achieving greater union with God (theosis). Like Roman Catholics, they consider church tradition to be just as authoritative as Scripture and also practice veneration of Mary, the saints, and icons.

Protestant: Protestant Christians split from the Catholic Church during the period now referred to as the Protestant Reformation. They denounced the extra-biblical traditions and corrupt practices of the medieval Roman Church and sought a return to Scripture alone for doctrine. While viewing tradition as helpful, Protestants today emphasize the need to respect Scripture as the highest authority for Christian belief and practice. Protestants also emphasize that salvation is by God’s grace through faith, not through works or rituals (even though those things are important). 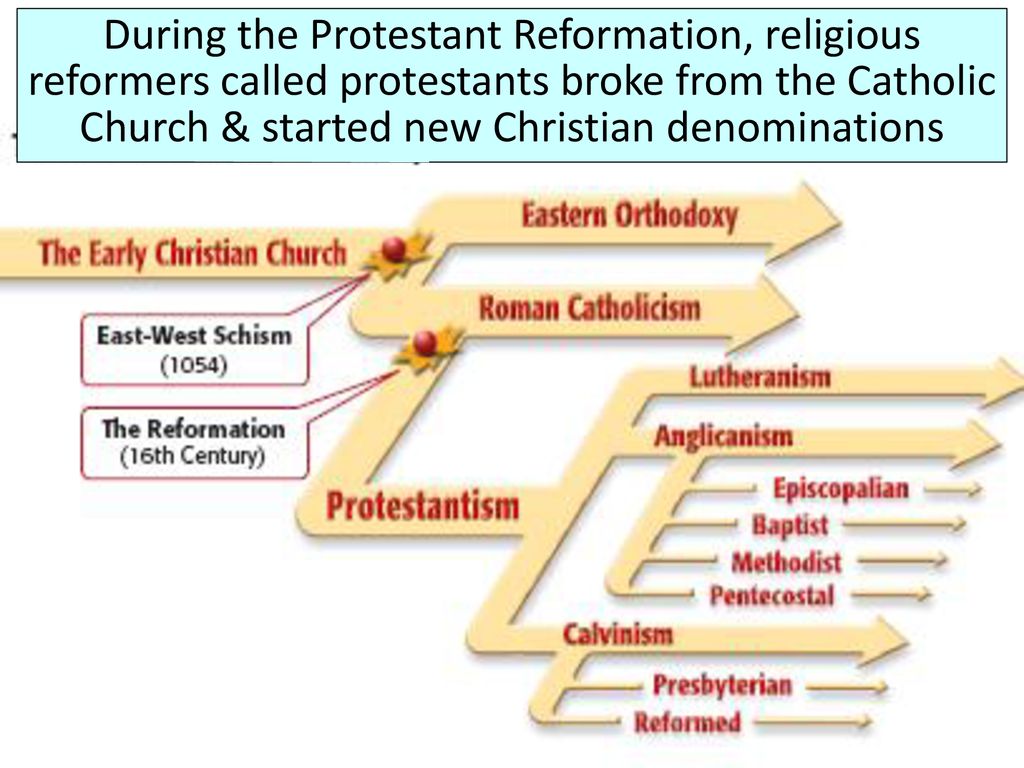 The Anglican Church is the national church of England. In America, the official presence of the English Church is in the form of the Episcopal Church (after the Greek word for “overseer”: episkopos), although there is also a more conservative branch known as the Anglican Church in North America.

Its main distinction is its organizational structure, which is similar to Catholicism: one archbishop presides over a number of other bishops who in turn preside over local congregations. Anglican/Episcopal churches also tend to be very formal/liturgical in their worship services, place great value on historic traditions, and have a high view of the sacraments. They are also widely known for the Book of Common Prayer, which serves as a guide for Anglican worship services and daily prayer.

Derives its name from the Greek word for “elder” (presbuteros). Presbyterianism is noteworthy for its unique organizational structure, in which local congregations are governed by teams of elders who, in turn, are part of an overarching assembly of elders. In America, the largest of these assemblies are the PC-USA (which is more liberal in its leanings) and the PCA. The Presbyterian denomination is also distinctive for its emphasis on Reformed/Calvinist theology.

As the name implies, Lutheran churches are affiliated with the theology of Martin Luther, the German friar/professor who kick-started the Protestant Reformation. Lutherans have a high sacramental theology, perform infant baptisms, and hold to specific understandings of justification and amillennial eschatology. Also, Lutherans teach that the Catholic Pope is Antichrist, so there’s that.

The Baptist denomination is one of the more well-known in the United States. Two things in particular make them unique. The first is their insistence that baptism must be reserved only for individuals mature enough to make a personal profession of faith (and done by full immersion, not sprinkling!). The second is their emphasis on the independence and self-governance of local church congregations (although many local Baptist churches choose to be affiliated with larger Baptist conventions, like the Southern Baptist Convention). Some Baptists also teach that certain spiritual gifts like healing, tongues, and prophecy died out once the New Testament was completed (this view is called cessationism).

This denomination stems from the ministry of John Wesley in the 1700s. Wesley was an Anglican priest who pioneered new ministries on the American frontier. His followers, known as Methodists, subsequently split off into a new denomination. Methodist theology is traditionally Arminian. Some Methodists believe that Christians can achieve perfect sanctification in this life (Wesleyan Holiness Movement). Many also teach that one can lose their salvation through willful/persistent sin. Many Methodist churches also place a heavy emphasis on social activism. Methodist worship services are often more formal/liturgical, but some are contemporary. 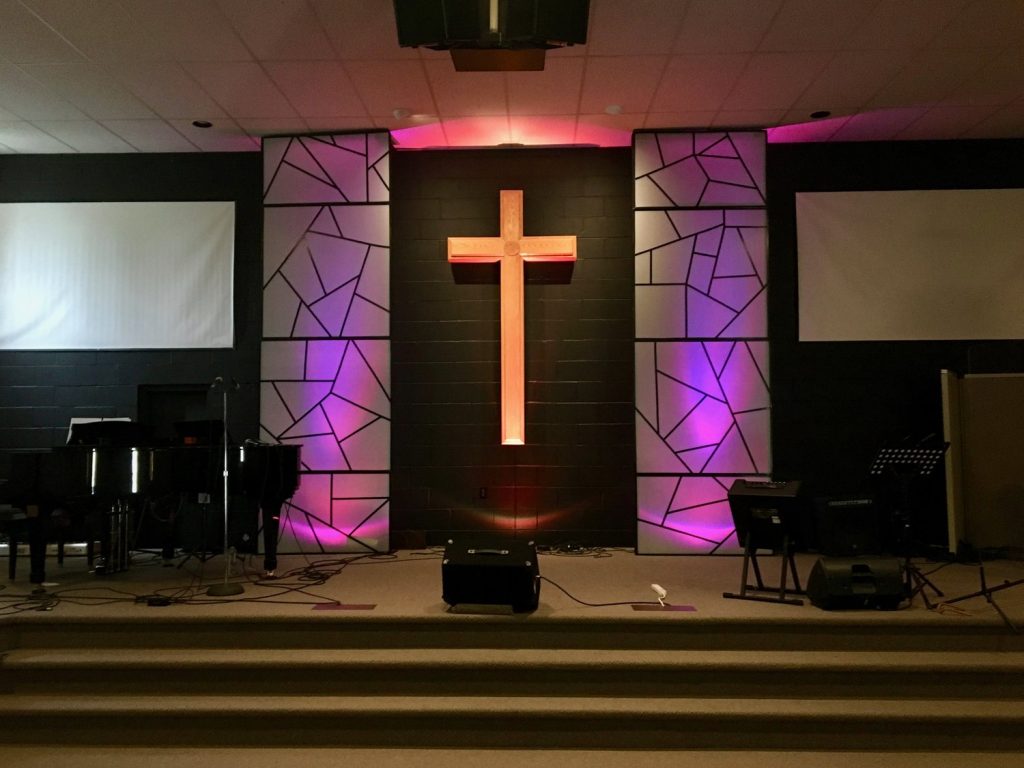 Pentecostalism is the largest Protestant denomination worldwide. It has grown especially in Asia and Africa thanks to missionary endeavours. Its main distinction is its emphasis on the continuance of the miraculous gifts of the Spirit (healing, tongues, and prophecy).

Traditional Pentecostal distinctions also include 1) the belief that the “baptism in the Holy Spirit” is an event subsequent to conversion, and 2) the belief that Spirit-baptism is always evidenced by speaking in tongues. Some branches of Pentecostalism also place an emphasis on trying to return to the conditions and practices of the first-century church (as described in the book of Acts). Pentecostalism also has many sub-denominations, including Classical Pentecostalism, the Assemblies of God, the Foursquare Church, Holiness Pentecostals, and the Apostolic Church.

Church of Christ and Disciples of Christ

The Church of Christ denomination, while not as large as those mentioned above, is unique in its emphasis on simplicity and “Bible-only” teaching. They generally reject the use of creeds and historical theology when forming their doctrine. Churches of Christ are also known for forbidding the use of musical instruments in worship services.

A closely-related denomination is the Disciples of Christ. This group also denies creeds and teaches by way of having members read the Bible and follow whatever it says to them. All that’s required to become a member is that you undergo a believer’s baptism.

Anabaptist groups emerged out of the radical wing of the Protestant Reformation — those who distanced themselves from participating in society. Today, Anabaptist offshoots include the Mennonites, the Amish, and the Hutterites. They are well-known for their emphasis on pacifism, non-participation in military or political matters, and (in some cases) living in secluded, alternative communities.

And there you have it! Obviously much more detail could be given on any of these denominations and their own subgroups, but hopefully, now you can at least tell your Lutherans from your Episcopalians.

1 thought on “Breaking Down The Differences Between Major Christian Denominations”