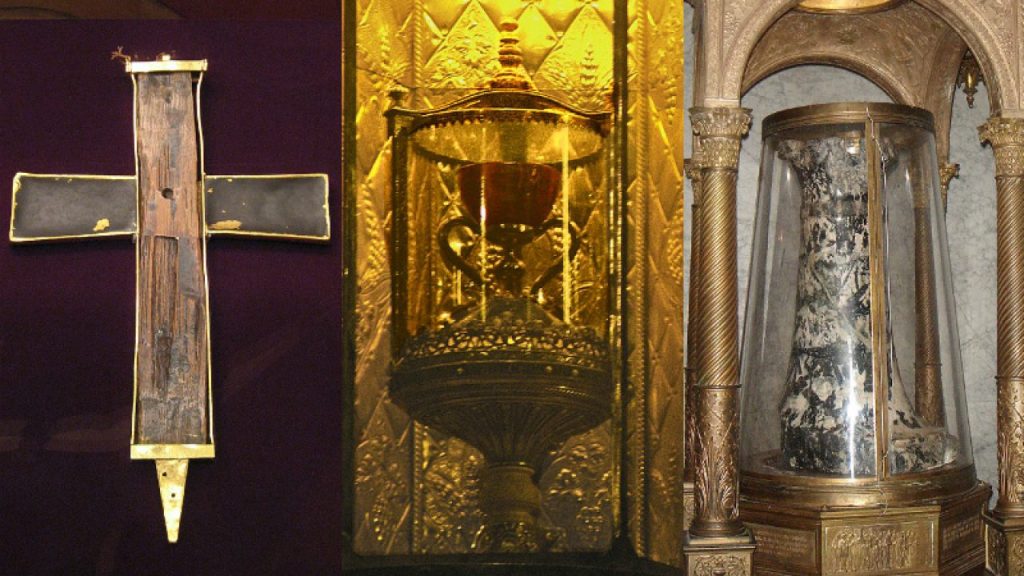 The earliest source of the existence of relics – objects of great religious significance – in Christianity is mentioned in the Old Testament when a man was brought back to life upon touching the prophet Elisha’s bones.

“Once while some Israelites were burying a man, suddenly they saw a band of raiders; so they threw the man’s body into Elisha’s tomb. When the body touched Elisha’s bones, the man came to life and stood up on his feet.” 2 Kings 13:20–21, Old Testament (The Bible), New International Version, 2011. Bible Hub.

Relics became trendy after the Second Council of Nicaea in 787. The council decreed that veneration of relics isn’t paying respect to an inanimate object, which would be breaking one of the ten commandments that forbids idol worship. Rather it is a form of intercessory prayer. Among the belief that the saints might intercede for us in heaven, there are also many recordings of cures and miracles attributed to relics. It is important to understand that relics represent the saint, therefore carrying his or her holiness. Following the Second Council, it became a norm for churches to contain relic altars. This was the beginning of the beautiful art of reliquaries, but also the crazy history of counterfeit black markets, some of which exist to this day.

Here are some of the weirdest, morbid, or just most interesting Christian relics we could find! Happy reading! 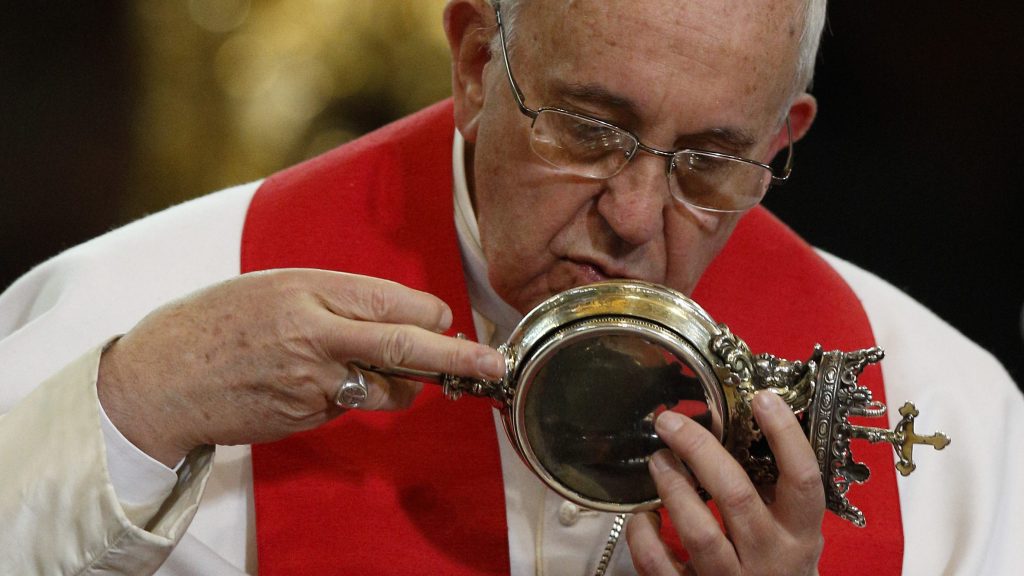 1. The Blood of St. Januarius

St. Januarius is the patron saint of Naples in Italy. An ampule reliquary containing his blood has been kept in the Duomo di Napoli, Naples Cathedral since the 14th century. The dried blood is famous for events of liquefaction, usually three times a year, on September 19th (St. Januarius’s Day), December 16th (day of Naples archdiocese) and the memorial day of his relic reunification. There are reports of years that the blood liquefaction miracle did not occur, connected by observers to important world or church events. 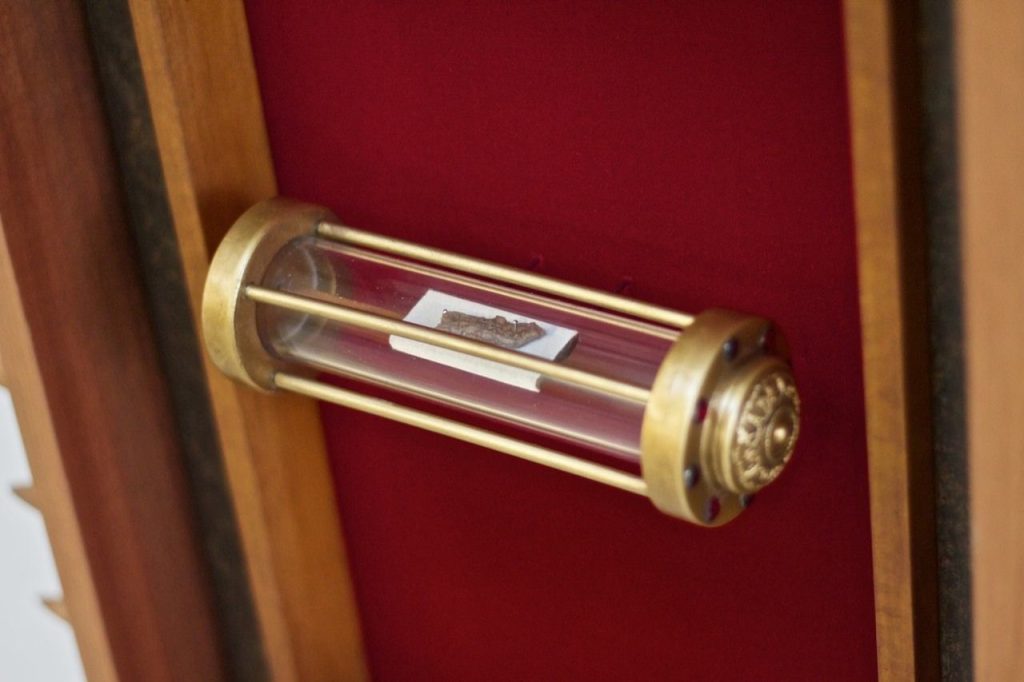 Professionally called “The Holy Prepuce” is a relic of, well, foreskin removed during Jesus’s circumcision. At least 18 churches in Europe have claimed to possess this delicate piece starting from the year 800, when Charles the Great gifted it to pope Leo III, grateful for being crowned Emperor. Most of the sites are connected to the Feast of the Holy Circumcision (1st of January), popular in France and in Italy. The last known trace of the foreskin relic was in Calcata, Italy, from where it vanished in 1983. Just like with other “missing” relics, there are many rumours and they just get crazier and crazier. 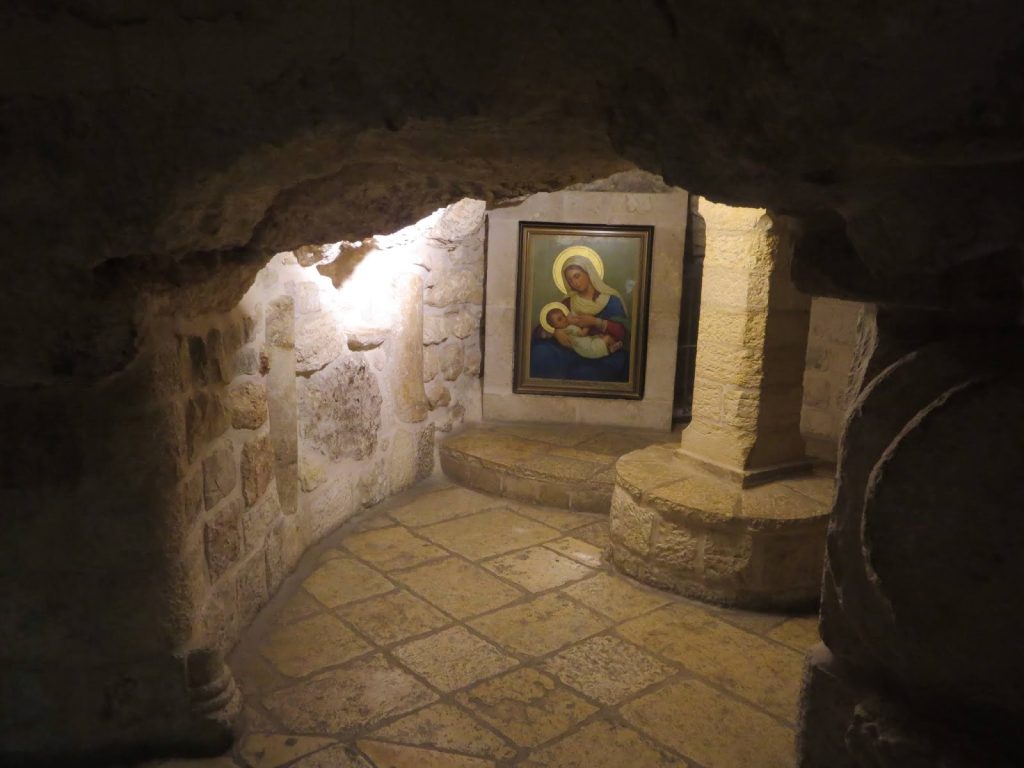 The Madonna Lactans (The Breastfeeding Madonna) won’t be a new trope for art history geeks. But did you know there are relics of Mother Mary’s Breast Milk too?

You can find it in the Chapel of the Milk Grotto in Bethlehem, in the Palestinian Territories. The Grotto was erected in 1872, but the sight was a center of Christian pilgrimage from the Byzantine era. According to Christian tradition, Bethlehem is where the Holy Family found refuge during the Massacre of the Innocents (also the place of Jesus’ birth). Virgin Mary’s milk supposedly dropped on the floor while she was breastfeeding Baby Jesus, changing its colour to white. The Grotto is a popular shrine among couples struggling with infertility. The site sells limestone powder made from the grotto’s stone, meant to be dissolved in a drink and consumed as a “cure”. According to the Church, such powder can be classified as a third-class relic. 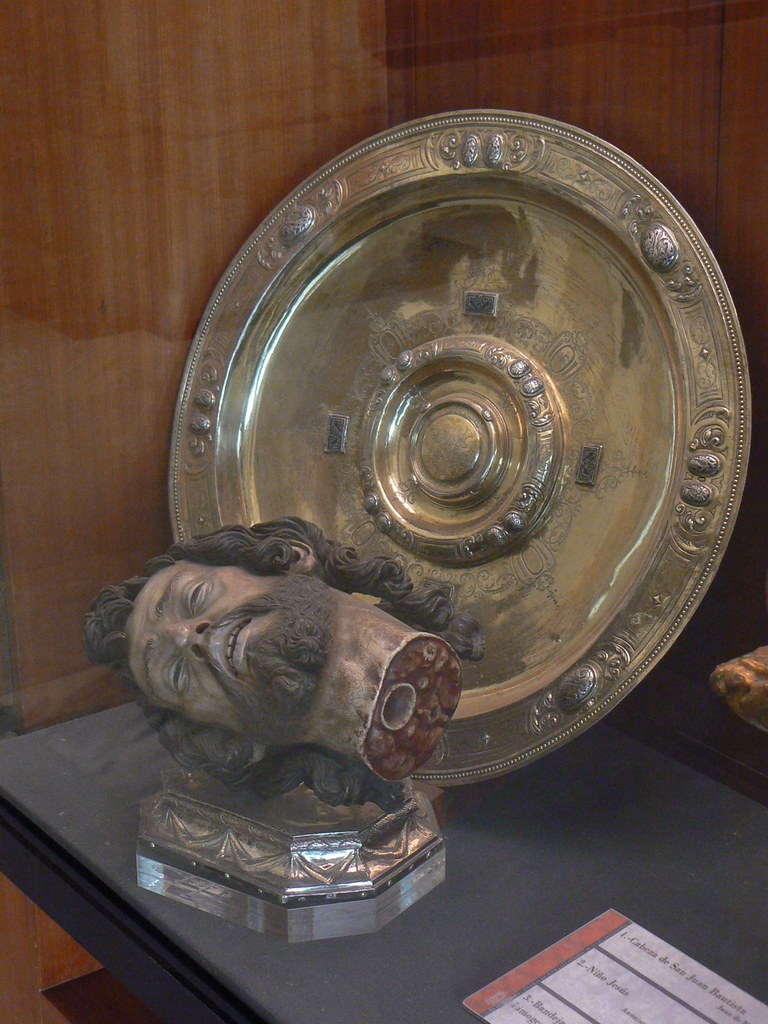 St. John the Baptist is a major religious figure in Christianity, portrayed as a forerunner of Jesus Christ. According to the New Testament, St. John was beheaded by Herod Antipas around 28-36 CE as a punishment for criticizing the ruler’s recent divorce followed by an unlawful marriage. The beheading was requested by the ruler’s stepdaughter, Salome.

Art history often portrays the saint’s beheading, presenting his head on a silver platter. According to legend the original silver platter made it to Constantinople but had to be sold by the Crusader in order to pay for his travel back. The relic was on display in the Amiens Cathedral until the French Revolution, which led to the confiscation of all Church property and treasure. The head was later returned to the cathedral in 1816. Interestingly enough, we can also find St. John Baptist’s Head on display in the Basilica of Saint Sylvester the First in Rome, Italy. That’s not all however, Residenz Museum, Munich also claims to have the relic, as does the Umayyad Mosque in Damascus, Syria. I don’t know about you, but I highly doubt that St. John the Baptist was the Hydra, so something doesn’t add up here. 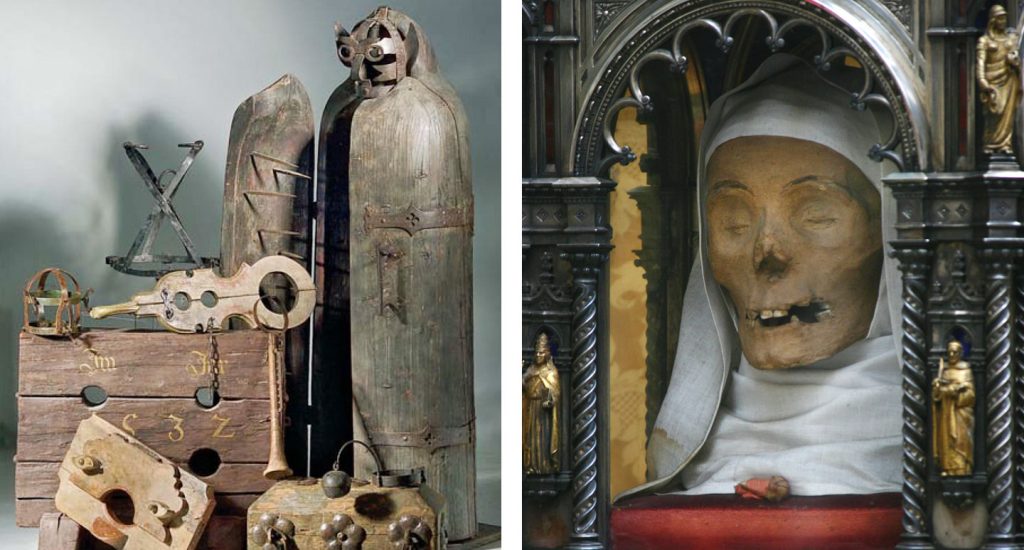 St. Catherine of Siena was a lay-member in the Dominican Order, known for receiving stigmata (appearance of bodily wounds in locations corresponding to the crucifixion wounds of Jesus Christ) and having mystical visions as early as the age of seven. She died young, from natural causes, but due to the appearance of stigmata and pain, she is considered a martyr. She died outside of her convent, in Rome – but her head was stolen in order to bring it back to Siena.

According to the legend, when the head-thieves with sacred intentions were stopped by Roman guards, St. Catherine’s remains turned into hundreds of rose petals. The thieves were obviously let free and to their surprise, the head re-materialized (as intact as a severed head can) in their bag. Her head currently rests in a beautiful reliquary in the Siena Church of San Dominico. 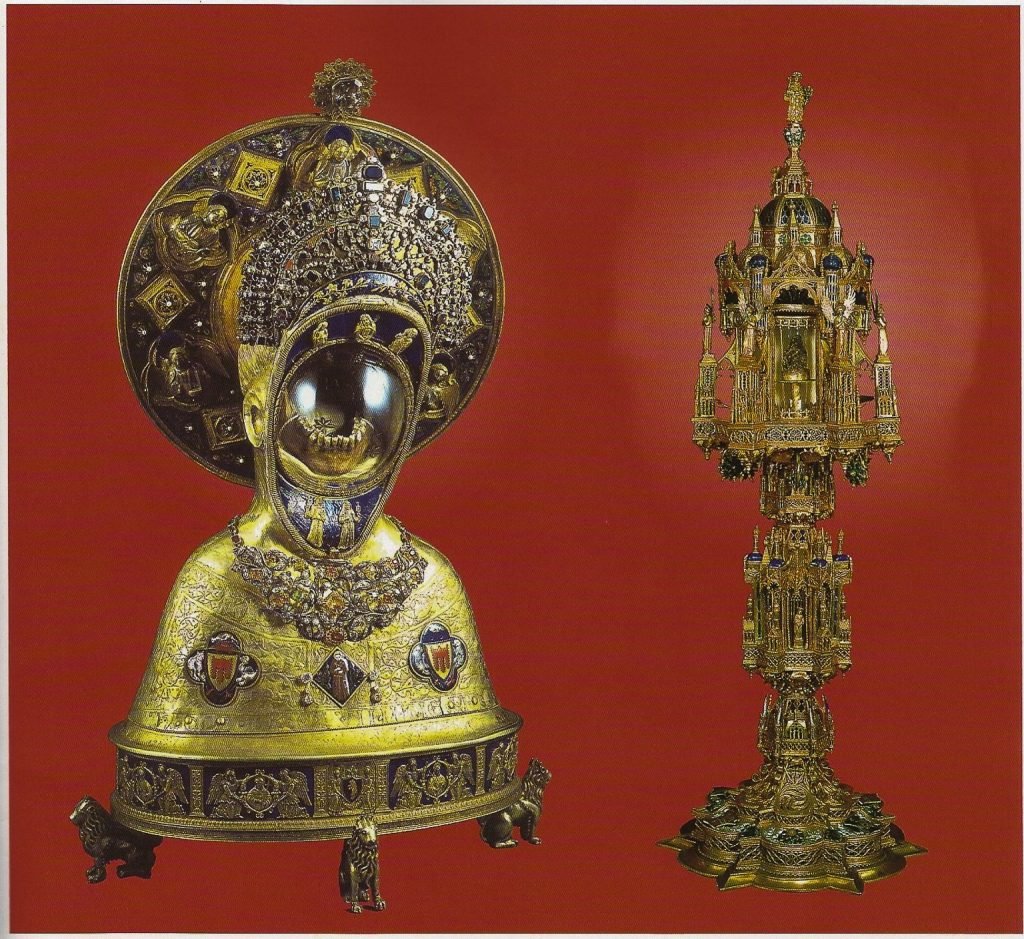 6. The Tongue and Jaw of Saint Anthony

Unlike most of the Saints pictured in this article, Saint Anthony of Padua did not die as a martyr but of edema (swelling). His body was exhumed in 1263, more than thirty years after his death, and to everyone’s shock Anthony’s tongue hadn’t decomposed. Why the tongue? Saint Anthony was known and praised around the world for his captivating sermons. Both the tongue and the jaw bone are displayed in the Basilica of Saint Anthony in Padua. Fun fact: the Tongue did a full-on rockstar tour through New York City churches in 2013.

How many of these relics have you heard of, and can you think of any other strange relics that are knocking about? Share them in the comments below.