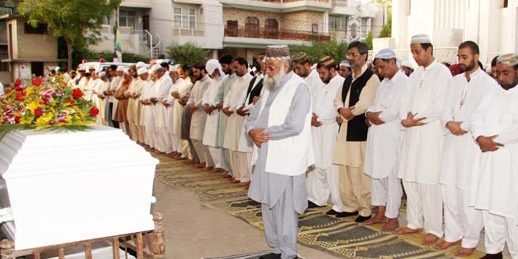 Understanding The Funeral Rituals of Muslims

Islam is one of the three great monotheistic religions (Jewish, Christian, Islamic). Concerning Muslims, some traditions are difficult to understand, especially when it comes to funerals. During this painful period, Muslims perform several rites that are very important to them.

The cleansing ritual, also called the “funeral cleansing”, is an essential ritual in the Muslim religion. When a person loses their life, the body is considered impure and must be purified. This purification is the purpose of the funeral cleansing. This ritual consists of carefully washing the deceased. According to tradition, this operation must be carried out by 4 people of the same sex as the dead. Usually, the relatives of the deceased perform the cleansing ritual, but it is possible to call in professionals.

Although the cleansing ritual is done meticulously, there are a few steps to follow. The lifeless body must first be washed three times, and above all, it must be perfumed. The mouth must be closed and held by a bandage. The legs of the deceased must be tied together, and his arms will be arranged along his body or placed on his chest. Then, the body will be covered with a white burial shroud, also called “El Kafn”, which is composed of 3 unstitched cloths used to wrap the entire body. And after this ritual is finished, the body of the deceased is purified.

The burial, according to the Muslim religion, must be carried out 24 hours after the death. During this burial, the deceased’s body is laid on its right side, and its face must be bowed in the direction of Mecca.

In some countries, it is obligatory to carry the body in a coffin. However, the Muslim tradition also allows the transportation of the deceased without a coffin. 4 men, therefore, transport the body to the grave. In this coffin, the body of the deceased is covered with a white sheet. In contrast, his head is uncovered to recite the Shahada (Islamic oath). And it is before the burial that the family and relatives of the deceased recite their funeral speech.

For the funeral prayer, there are two practices: going through the mosque or going directly to the cemetery. If the deceased is taken to the mosque, he/she should be directed to the “mihrab”, a niche in the wall at the back of the building that indicates the direction of Mecca. In the second case, the prayer is performed in the cemetery.

A person called Imam shortly leads the prayer, and he has to pronounce these prayers in a loud voice. The prayer performed at the funeral is contrary to the other usual prayers, and it is not accompanied by bowing or prostration. During the recital, the individuals all remain standing.