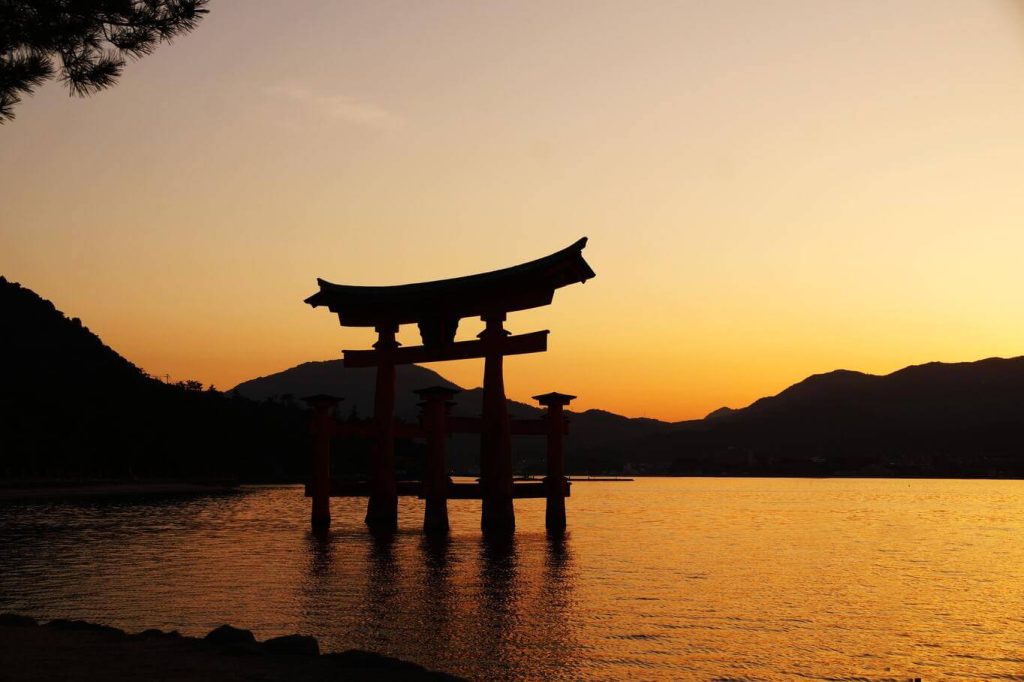 8 Major Japanese Gods and Goddesses You Should Know About

When we talk about the Japanese gods and goddesses, we must understand that much of the mythology and pantheon is derived from the traditional folklore of the Shinto – one of the major religions of Japan. And interestingly enough, much like Hinduism, Shinto or kami-no-michi (‘the Way of the Gods’) is a polytheistic mode of religion that results from the highly pluralistic culture of Japan throughout history. In essence, Shinto, without any proclaimed founder or prescribed tenets, can be perceived as the evolution of local animistic beliefs of Yayoi culture (300 BC – 300 AD) that were further influenced by both Buddhism and even Hinduism throughout the course of centuries. Let’s meet the 8 most important Kami of the Land of the Rising Sun, starting with: 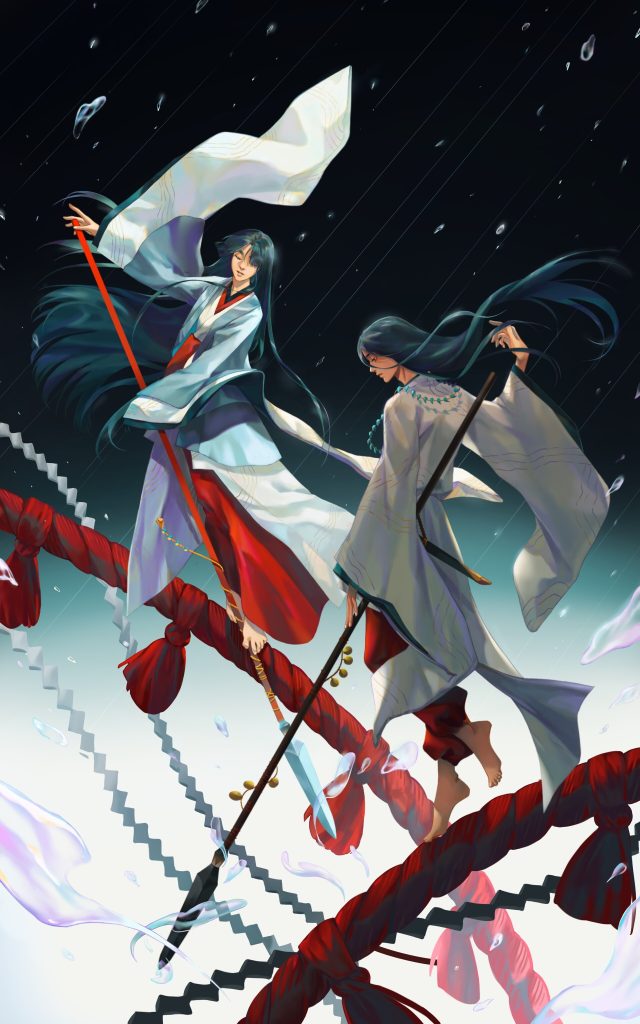 Izanami and Izanagi – The Primordial Japanese Gods of Creation

Izanagi no Mikoto and Izanami no Mikoto are the Shinto deities at the center of Japan’s creation myth, and the mother and father of all gods. Unsure of how to create order from chaos, they plunged a jewelled spear into the primeval gulf between heaven and earth. The drops that fell from the tip of the spear created land.

Soon after, they began to give birth to the kami that would inhabit it. Izanami was burned to death when she gave birth to the fire god, Kagutsuchi. Stricken with grief, Izanagi visited the Land of the Dead, Yomi, determined to bring her back. He was horrified to find his wife no more than a decaying, maggot-filled corpse, and he fled in revulsion back to the entrance. He sealed her inside, and she became a goddess of the dead, determined to take 1,000 lives every day to avenge her shame. In turn, Izanagi decided 1,500 people would be born every day. 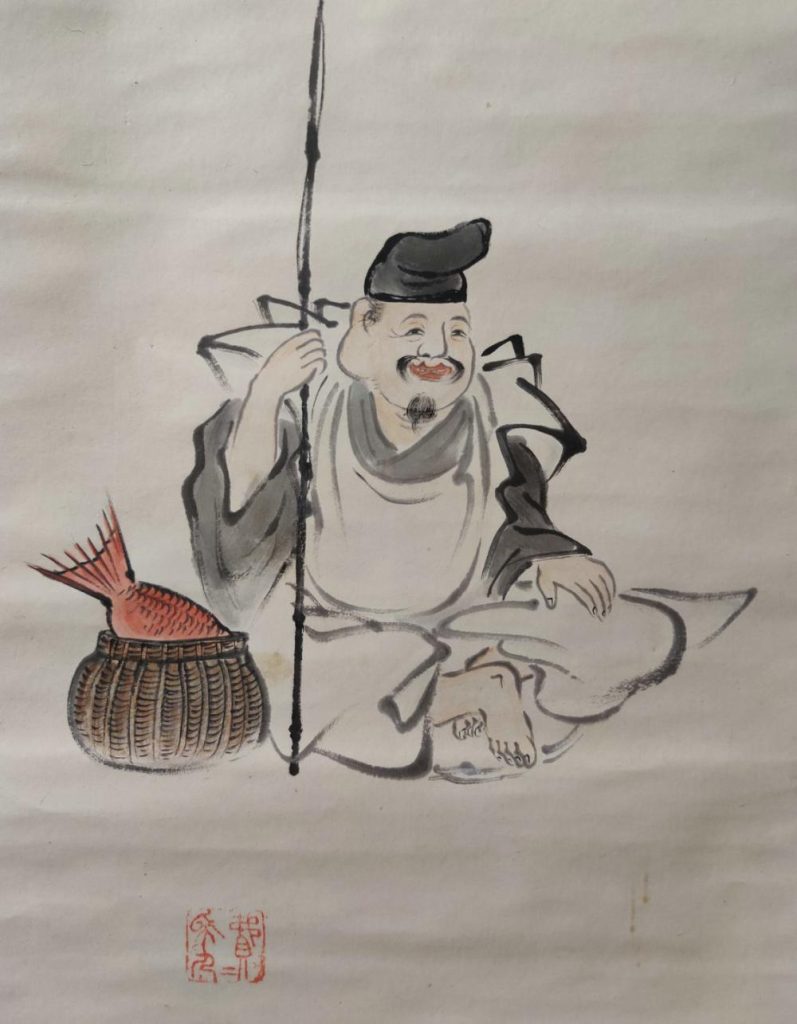 Yebisu – The Japanese God of Luck and Fishermen

Ebisu, sometimes referred to as Yebisu, is the patron deity of fishermen and tradesmen, and another of Japan’s “Seven Gods of Fortune.” He is often depicted as a plump, happy fisherman who carries a fishing rod in one hand and red snapper in the other. The snapper also symbolizes fortune, as its name in Japanese, tai, is phonetically similar to the word for an auspicious or celebratory occasion, omedetai. Some legends identify Ebisu’s origin as that of the first god birthed by Izanagi and Izanami, the misconceived Hiruko, who was malformed and cast into the sea. Others say he was the son of the hero deity Okuninushi, the “Great Land Master.”

He is commonly sighted on cans of the beloved Japanese beer, Yebisu. 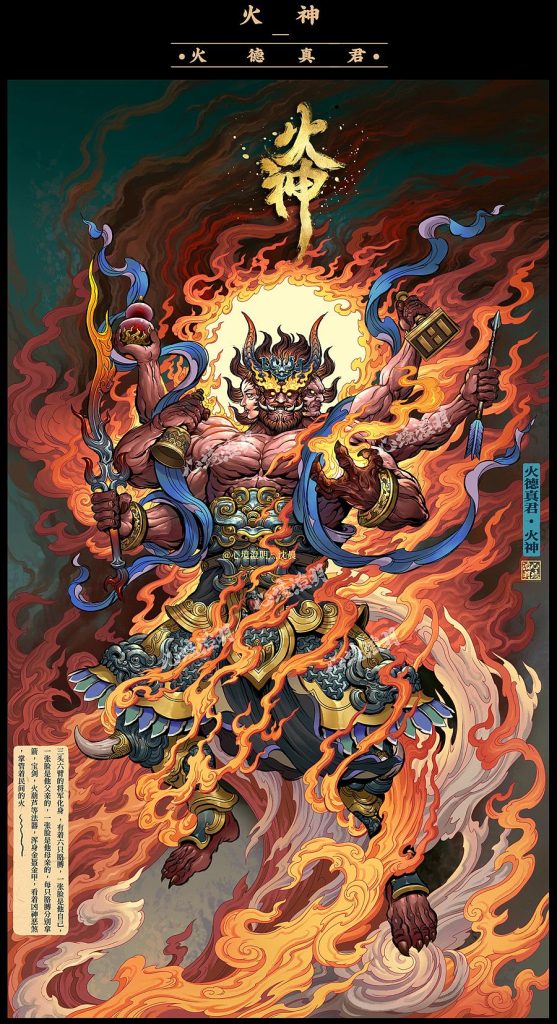 The Japanese god of fire, Kagutsuchi (or Homusubi – ‘he who starts fire’) was another offspring of the primordial Izanagi and Izanami. In a tragic twist of fate, his fiery essence burned his own mother Izanami, which led to her death and departure to the underworld. In a fit of rage and revenge, his father Izanagi proceeded to lop off Kagutsuchi’s head – and the spilled blood led to the creation of even more kami, including martial thunder gods, mountain gods, and even a dragon god. Simply put, Kagutsuchi was regarded as the forebearer of various potent and powerful deities who even brought forth the creation of iron and weapons in Japan.

As for the history and cultural side of affairs, Kagutsuchi, as a god of fire, was unsurprisingly perceived as a (potential) agent of destruction to Japanese buildings and structures typically made of wood and other combustible materials. Suffice it to say, in Shinto religion, he becomes the focus of different appeasing rituals – with one ceremony pertaining to the Ho-shizume-no-matsuri, an imperial custom that was designed to ward off the destructive effects of Kagutsuchi for six months. 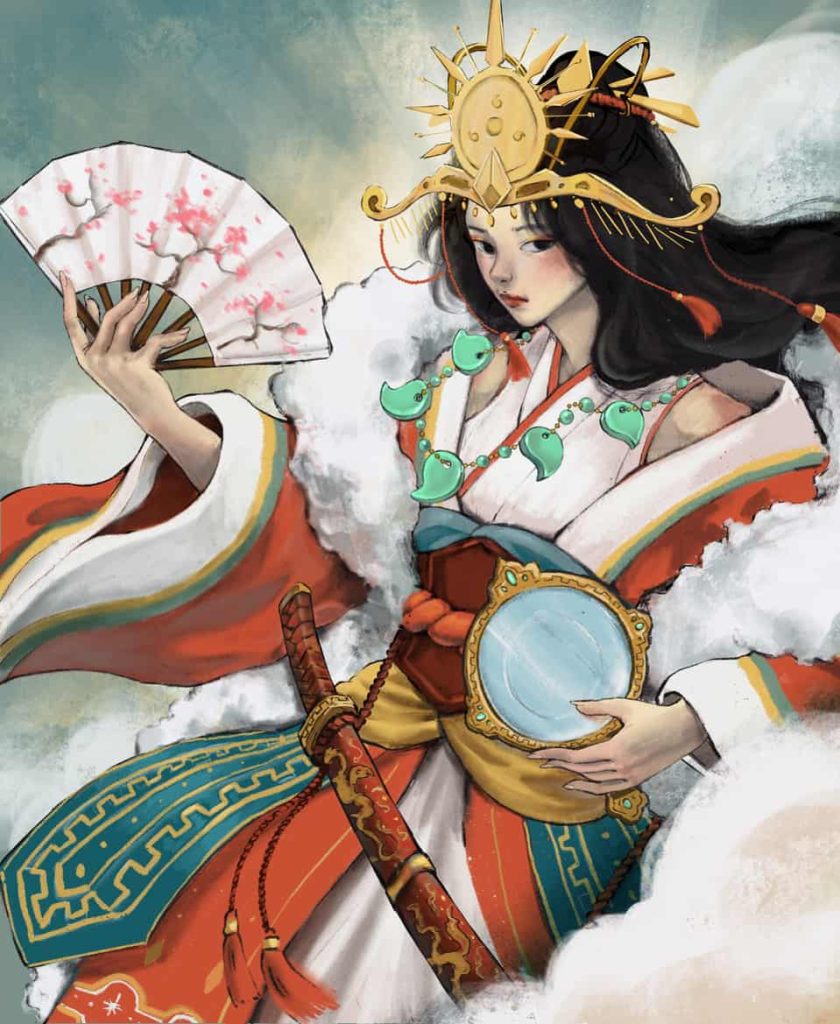 Amaterasu – The Japanese Goddess of the Rising Sun

Amaterasu Omikami is the Shinto sun goddess from which the Japanese imperial family claimed descent. It’s said that she was birthed from the left eye of Izanagi when he washed the remnants of the underworld from his face after fleeing from his wife, Izanami.

One popular story about Amaterasu involved a fight with her tempestuous, violent-tempered brother Susano-O. After the fight, she fled into a cave, which caused the world to plunge into darkness. To lure her out of the cave, the other gods staged a raucous celebration at the entrance. When her curiosity piqued, Amaterasu went to see how they could entertain themselves in the absence of light. When she exited the cave, the other gods placed a shimenawa (sacred straw rope) in front of the entrance so that she couldn’t return to hiding.

The Ise Grand Shrine in Mie Prefecture is her primary place of worship, and one of the most significant Shinto shrines in all of Japan. One of the Three Sacred Treasures of Japan, the Sacred Mirror, is preserved within. 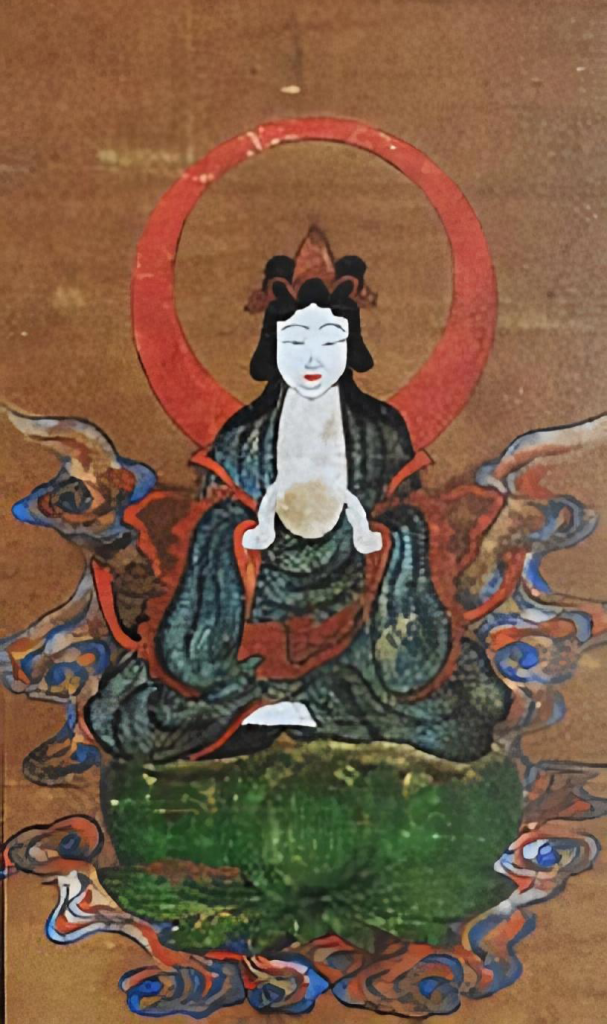 Tsukiyomi – The Japanese God of the Moon

In contrast to many Western mythologies, the Moon deity in Japanese Shinto is a male – given the epithet of Tsukiyomi no Mikoto or simply Tsukiyomi (tsuku probably meaning ‘moon, month’ and yomi referring to ‘reading’). He is one of the Mihashira-no-uzunomiko, being born from the washing of Izanagi’s right eye – therefore making him the brother of Amaterasu, the sun goddess. In some myths, he is born from a white copper mirror held in the right hand of Izanagi.

As for the mythical narrative, Tsukiyomi, the god of the moon went on to marry his sister Amaterasu, the goddess of the sun, thereby allowing for the union of both the sun and the moon in the same sky. However, the relationship was soon shattered when Tsukiyomi killed Uke Mochi, the goddess of food. The heinous act was apparently carried out of disgust when the moon god was witness to Uke Mochi’s spitting out of various food items. In response, Amaterasu broke off with Tsukiyomi by moving to another part of the sky, thus making day and night completely separate. 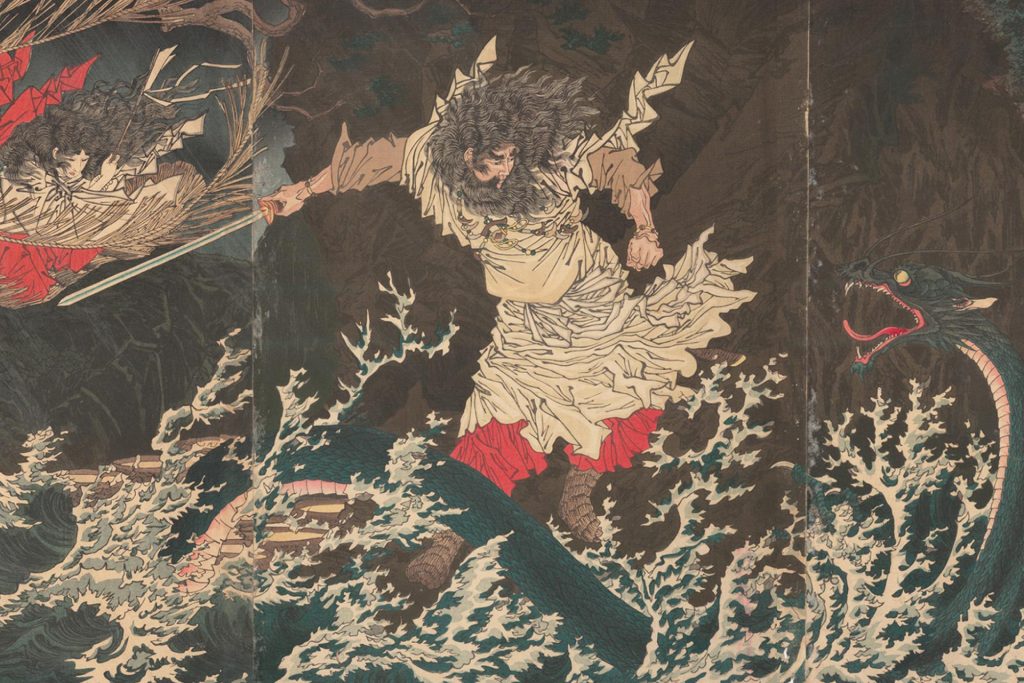 Susanoo – The Japanese God of Seas and Storms

Born from the nose of Izanagi, the father of Japanese gods, Susanoo was a member of the trio of Mihashira-no-uzunomiko, thereby making him a brother to both Amaterasu and Tsukiyomi. As for his attributes, Susanoo was perceived as a temperamental, dishevelled kami who is prone to chaotic mood swings – thus alluding to his power over the everchanging storms. Mythically, the mercurial nature of his benevolence (and malevolence) also extends to the seas and winds near the coast – where many of his shrines are located in South Japan.

Talking of myths, Susanoo is often celebrated in the Shinto folklore as the guileful champion who defeated the evil dragon (or monstrous serpent) Yamata-no-Orochi by cutting off all its ten heads after imbibing them with alcohol. After the encounter, he recovered the famed sword Kusanagi-no-Tsurugi and also won the hand of the woman he saved from the dragon.

On the other hand, Susanoo is also portrayed in a somewhat negative light (thus reflecting the storm god’s chaotic nature), especially when it comes to his rivalry with Amaterasu, the leader and sun goddess of the kami. On one occasion, their challenge to each other turned bitter, with the wrathful Susanoo going on a rampage by destroying the sun goddess’s rice fields and even killing one of her attendants. In response, the angry Amaterasu retreated into a dark cave, thus snatching away her divine light from the world, while the ever-boisterous Susanoo went away from heaven. 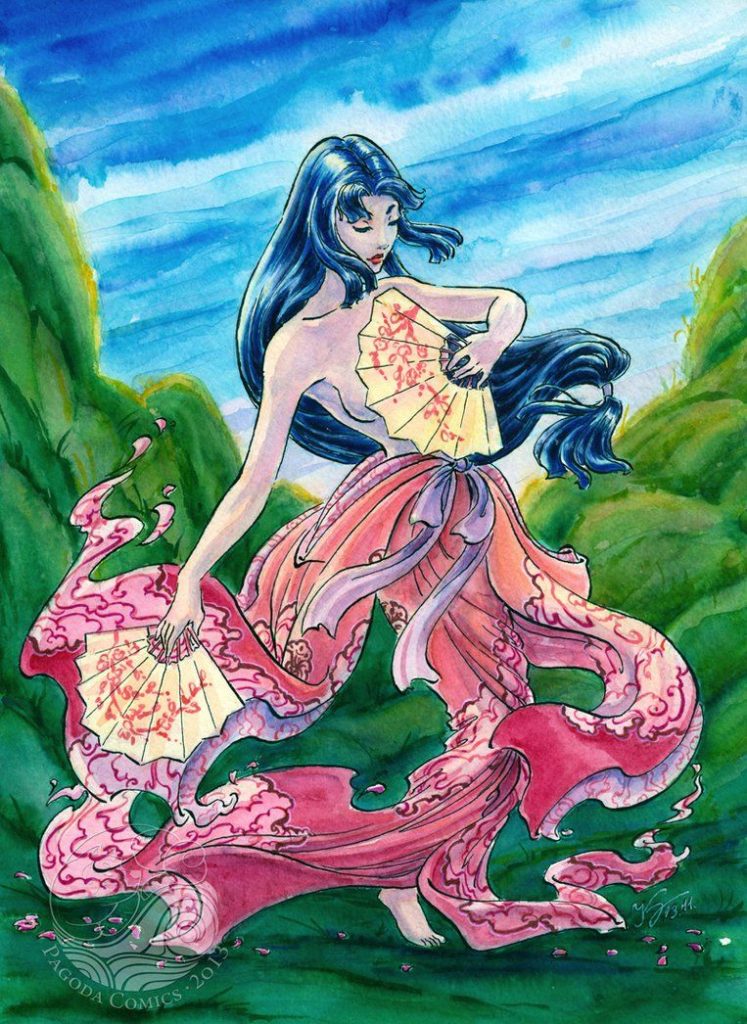 Ame-no-Uzume – The Japanese Goddess of Dawn and Dancing

The jovial female deity of the dawn (which sort of made her the assistant to Amaterasu, the deity of the sun), Ame-no-Uzume also espoused the spontaneity of nature. This latter aspect made her the patron goddess of creativity and performing arts, including dancing. To that end, one of the central myths in Shinto pertains to how Amaterasu, the sun goddess, locked herself in a dark cave after falling out with Susanoo, the storm god. This resulted in the arrival of darkness over the heavens and the earth.

So, in a bid to distract the other anxious kami, Ame-no-Uzume, by virtue of her intrinsic spontaneity and creativity, covered herself in the leaves of the Sakaki tree. She then started making cheery cries and it was followed up by gleeful dancing atop a platform. She even resorted to removing her clothes, which led to amusement among the other gods who started roaring in joy and laughter. The ensuing merriment steered the curiosity of Amaterasu, who finally came out of her cave, and thus the world was once again covered in radiant sunlight.

These are just 8 of the 800+ kami of Shinto, and not considering the many Yokai, Oni and other fantastical creatures of the Japanese pantheon. Would you like to learn more? Let us know in the comments below.