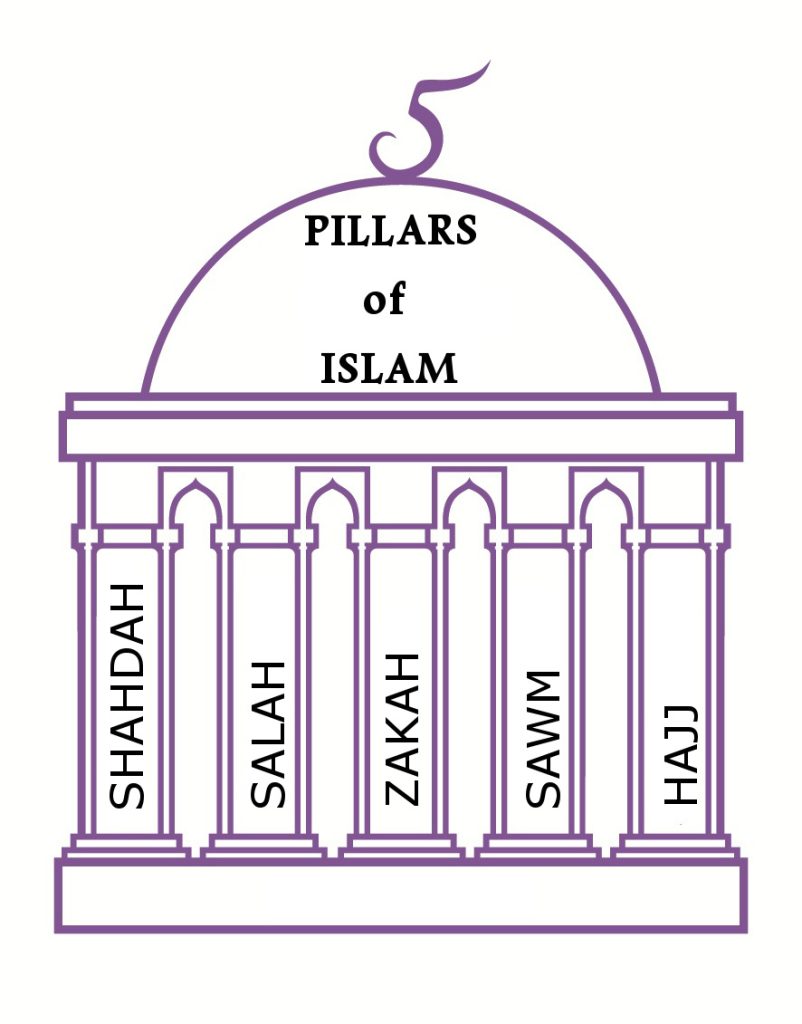 An Overview of The Five Pillars of Islam

A lot of what most people think they know about Islam is found in the media, where tales of fundamentalism and violence are the norm. The five pillars – the declaration of faith (shahadah), prayer (salah), alms-giving (zakat), fasting (sawm) and pilgrimage (hajj) – constitute the basic norms of Islamic practice. They are accepted by Muslims globally irrespective of ethnic, regional or sectarian differences. In practice, circumstances vary and some people are more committed than others. Such things as age, stage of life, work, family responsibilities, health and wealth all make a difference.

Shahadah is the term given to making a declaration of faith and dedication to your belief that there is only one God, and that he sent His Messenger, Prophet Muhammad to guide all of mankind. As the First Pillar of Islam, Shahadah is one of the most important and acts as the first submission to Islam and announcing a person’s intention as a true follower. Reverts to Islam (Islam differs from other religions by stating that new adherents do not convert to the religion, but rather revert back) are also required to make Shahadah as their first act of joining the faith and this serves as an affirmation of their commitment to their faith. 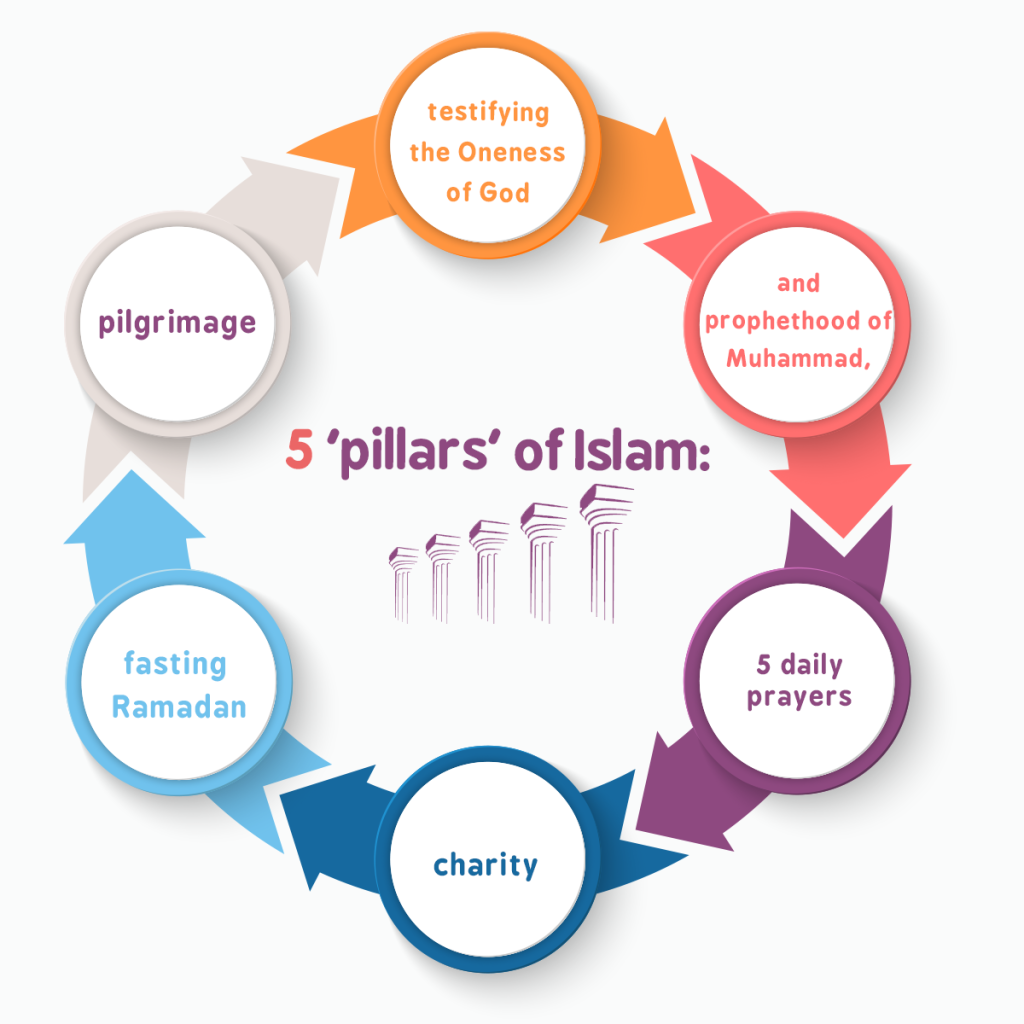 Salah, also written as Salat, is the second Pillar of Islam and is the act of obligatory daily prayer that is carried out five times a day at set times. The five prayer times fall between sunrise and midnight, although the times change depending on where you are in the world and the time of year, in line with the lunar calendar. The prayers in order are as follows;

Part of the ritual of Salah is purifying your physical self (ablution) in preparation for prayer, this is a cleaning ritual known as wudhu and is an important first step that also washes away minor sins.

Adhaan, the call to prayer, is broadcast from Mosques to announce the set time for Salah throughout the day. Although this is normally recited at the Mosque, Muslims performing Salah at home can also recite adhaan at the exact time before they perform their daily prayers.

Many Muslims prefer to pray in congregation at their local Mosque which is a great way of demonstrating humanity and equality in Islam – in other words, we were all created by Allah and unto Him shall we all return.

Every year, Muslims pay a 2.5% share of their held wealth over a certain threshold to charity to help those less fortunate than themselves. An important lesson of Zakat is the acknowledgment that nothing we gain in this world is ever truly ours, it will not accompany us to the Hereafter, and it has no use being buried with us. Rather than our wealth, it is our good deeds towards those who need help and support that will help us enter Jannah (Heaven). 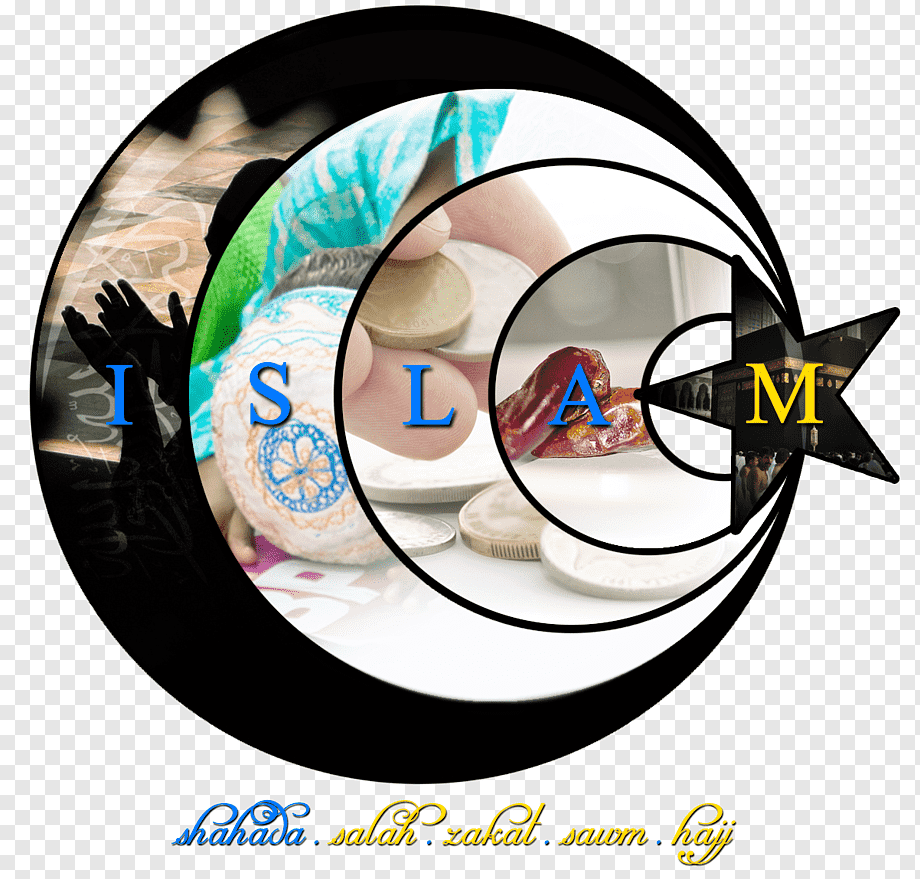 The term Sawm means to fast, which is where the month of Ramadan comes in (fasting during this month is Mandatory for all able-bodied Muslims, while optional during the rest of the year). Fasting is more than simply avoiding food. It is the practice of discipline and the abstaining of temptations and bad habits. From sunrise to sunset, Muslims avoid food and drink (including water), sexual activity, smoking and intoxication and any impure thoughts.

Certain individuals may be excused from fasting subject to their circumstances – such as those who are ill, expecting a child, are underage, and so on. There are also certain exclusions for those who are travelling during the fasting day, too. Some of these exclusions entail a forfeit by way of donation if the individual cannot make up the fast later. This is commonly known as Fidya.

Ramadan is then concluded with the festival of Eid-ul-Fitr, which is a day many Muslims choose to spend with family and loved ones. The day begins with congregational prayers at the Mosque, prior to which, Zakat-ul-Fitr (fitrana) is offered to those in need. Following this, Muslims celebrate and rejoice with close ones, praying, eating, and sharing gifts.

The fifth and final pillar of Islam is Hajj, the annual pilgrimage to Mecca. It is a time that Muslims from around the world congregate in Mecca to worship Allah and perform several rituals to strengthen their faith and devotion. Pilgrims must wear plain white clothing and enter a spiritual state of holiness, known as Ihram. Ihram helps promote unity amongst the Ummah in attendance, for no man or woman, rich or poor, resident or traveller, stands above another.

Hajj falls in the 12th and final month of the Islamic calendar, Dhul Hijjah, from the 8th to the 12th. It is a journey that every Muslim is obligated to take at least once in their lifetime if they have the means to do so.

Knowing something about the five pillars and their significance for Muslims isn’t just important to correct misunderstandings about what Muslims believe, it is also important in the work environment and for good working relations. For example, Muslim colleagues may request breaks and a space for prayer as well as support whilst fasting during Ramadan or annual leave at the time of the Hajj. These are important issues for all Muslims and not markers of fundamentalism. Understanding this better can help overcome prejudices about Muslims.

léonard
1
Tags :
Basics of IslamPillars of IslamPrimary Tenents of Islam

1 thought on “An Overview of The Five Pillars of Islam”